The 10 Greatest Chess Players of all time 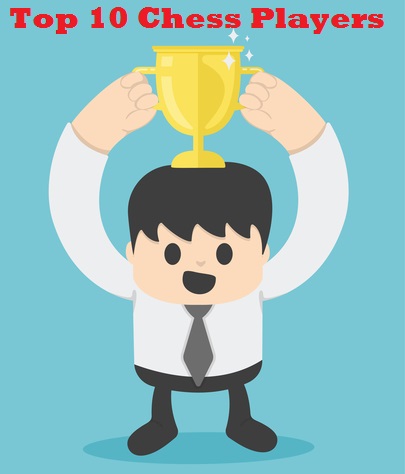 Being a game which has been played by many but mastered by only a few, chess presents a very hard test of tactics and skills. Throughout history, individuals who have mastered the game have done so through rigorous practice and exemplary tactfulness.

The game of chess comes across as very easy when it is being played within family and friends, but as soon as you meet someone with a better skill set than yours, you would realise the difficulties present within the game. While chess is a difficult game to play, it can be interesting and very refreshing for the brain. Legend says that all influential leaders were great players of chess.

While chess has been mastered by only a few, some players have stood up and proven themselves as one of the best. 10 players who have gained huge recognition within the chess fraternity (in a specific order) are:

Many people have testified that Paul Morphy was indeed the best player that the game of chess witnessed. The only regret in Paul Morphy’s case is that he didn’t pursue a career in the field. Paul grew up in a family of chess enthusiasts. As a kid, he would watch his family members play and interestingly used to learn all the tricks that they used.

Being an inquisitive child and a quick learner, Paul soon started practicing chess by himself. Such was the talent within him that he became New Orleans’ best at the tender age of 9. He played General Winfrield Scott in 1847. The General thought at first look that he was being made fun of by being paired with a kid, but the 9 years old Paul made a mockery out of the General by inflicting him with 2 losses.

At the age of 12, Paul went on to defeat a Hungarian master named Johann Lowenthal who was visiting his town. The success journey continued forward, as in 1857, Paul won the all American Chess Meet and got proclaimed as the best in the US. Having become pleased with his pursuits within the States, Paul decided to go to Europe, where he continuously defeated all the masters that dared to have a match with him. Staunton was the only English Master left undefeated as he refused to play after watching the young prodigy display his skills.

In Europe, he proceeded to France, where he defeated the then best European chess player Adolf Andersson. Paul was suffering from intestinal influenza during the bout but still went on to inflict defeat on the best European Master. After coming back from Europe, Paul retired from chess, only to play it as a past time activity. Considering how successful he had become in the few years he played, one can only imagine the effect that Paul would have had on chess, if he had played his full term.

A staunch communist by views, Mikhail Botvinik made plenty of contributions to chess, both through his charity work and extreme prowess in the game. Being a world champion for 15 years, from 1948-1963, no one can doubt the talent and skills that Mikhail displayed.

Most importantly, Mikhail Botvinik played an important part in revitalizing the game after the events of World War II. Mikhail went on to coach some of the other greats of the game, who would dominate chess in the years to come.

As a kid. Mikhail was very fond of chess and developed great skills at a very small age. When he was 12, Mikhail could compete against proper masters and bring them down to Earth. In 1925, Mikhail went on to defeat the great Capablanca in an informal exhibition match.

Mikhail went on to become a true great of the game by challenging opponents who were seemingly better than him. Mikhail Botvinik had the spirits of a champion and the motivation to spur him on. He retired in 1970 after enjoying one of the most decorated careers. After retirement, Mikhail went on to working with computer chess programs as well as training young Soviet chess players.

Being born with a will to win, Alexander Alekhine had, by the age of 16, garnered a reputation for himself as one of Russia’s best. The chess prodigy was not only very skilful, but he was also a very quick learner.

The young Alekhine was progressing at the speed of knots and in a short period of time, had made quite a name in the West for himself. In 1921, he was allowed by the Russian government to visit the West. Alekhine cashed in on the opportunity and never came back to Russia.

Once in London, Alekhine had the vision to defeat the great Capablanca. During his stay in London, he would tirelessly win small wagers to generate the amount of 10,000 pounds required to give a challenge. Eventually, Alekhine was aided by an Argentinean businessman who invested the amount for him.

Alekhine went on to shock the world by surprisingly defeating Capablanca. The victory of Alekhine put the whole chess world into frenzy, as everyone expected him to be a minnow. Alekhine dominated all of the chess competitions for the next decade to come, and stamped his mark as one of the best to play the game. His game eventually deteriorated due to a sickening addiction for alcohol which made him lose his aura.

Many would find the presence of a machine in the list of best chess players as a bit odd, but the role that the Deep blue from IBM has played in chess, both as a player and as an innovation, cannot be neglected.

The Deep Blue from IBM had numerous one-on-one bouts with the then champion Victor Kasparov. Kasparov kept annihilating the computer from 1989-1996, but the computer eventually had its way when it defeated Kasparov in a chess match still remembered as the most memorable match in history.

Kasparov accused the computer of cheating and incorporating unfair tricks, but no solid prove was found. The win of the machine over Kasparov also proved that the man made machines had now become powerful enough to both physically and mentally overpower mankind.

Computers are now regularly used by people to play the game on their desktops and smart phones, which makes the addition of Deep Blue, a logical one.

Bobby Fischer started as a young prodigy who had a rich history written in his fate. Like many other legends, Bobby Fischer turned out to be his own biggest enemy, as his eventual demise from the game is linked to his own attitude.

Fischer had a very luxurious childhood, where he would surprise the most talented masters by displaying his A-game. He eventually became a victim to his own greed for money. If there had not been greed for high cash sums, Fischer could have become the best player to grace the game.

Jose Capablanca holds the proud feat of remaining world champion for 7 consecutive years from 1921-1927.Considered by many as the best player to play chess, Capablanca excelled in a 5 minute per game form of chess, known as blitz chess.

Capablanca made a huge impression for himself as a kid when he became the champion of Cuba by defeating the Cuban champion at the age of 16.

Capablanca also formalized the rules for the championship, which came to be well-known as the London rules. He had a successive run of 63 continuous wins, which won over plenty of new fans.

Capablanca retired in 1931, only to come back in 1933 in the hopes to get more titles. Even though he demonstrated considerable prowess in his return, he was unable to win another title.

Willhelm Steinitz spent an astounding 8 years at the top of the international rankings. He was particularly gifted as a chess player and had a much decorated trophy cabinet to boast of his achievements. While Willhelm had a legendary chess career, he is famous for his innovations in the game of chess. Willhelm introduced many new chess moves which were in the start branded as being very defensive, as time passed by, people started realizing the master class that Willhelm had initiated.

The changes proposed by Willhelm Steinitz were soon part of every player’s game and became the hallmark of chess during the late 19th century.

Willhelm was an early groomer and by the age of 20, was playing against and defeating many international masters. His success during the early years made him earn the title of the “Austrian Morphy” after Paul Morphy, who was unstoppable during his early years. Willhelm had a very illustrious career and many Russian masters state him as their influence.

Emanuel Lasker ruled the chess world in the most fitting manner. The legend made history by being a world champion for an astounding 27 years. He spoke up for all the other masters by demanding more improved fees for them while they competed in an event.

He won his first title in 1894 from Steinitz, which started his climb to the top. The year 1894 meant the start of a 27 years trot of continuous wins for Lasker.

Emanuel Lasker, after an exemplary run of 27 years undefeated, was ultimately defeated by Jose Capablanca in 1921. This meant the end to Lasker’s dominance, as he retired after the match. Emanuel Lasker eventually came back from retirement during the year 1933 and amazingly finished 3rd on the list of very talented and proven players. The 65 years old Lasker finishing third amongst the masters was considered as a biological miracle.

If it wasn’t for the number one that we have chosen, Karpov had the credentials to go down as the best in the history of chess. Karpov is a contemporary legend and he had an unbelievable run of 10 consecutive years without losing in between 1975 and 85. The 10 years trot isn’t the only achievement up his sleeve as Karpov went on to win another six consecutive titles from 1993 to 1999.

Karpov was also part of the intriguing match with Gary Kasparov which lasted an epic 5 months. The match was eventually terminated because of the ill health of the players as Karpov had lost 10 kg within the duration of the tournament. Kasparov later went on to defeat Karpov in 3 different finals, which decreased Karpov’s glory to an extent, but he came back strongly in the late 90’s.

The success of Karpov cannot be defined in words. The legend is still alive and still astounds viewers with his belligerent skills.

No other player has shown domination which can be compared to the one shown by Gary Kasparov. Being a contemporary legend, the name of Gary Kasparov is synonym to the name of chess within the youth of today.

Kasparov started off with style by becoming the youngest ever title holder at the age of 22. He was ranked at number one almost endlessly from 1986 until when he retired in 2005. Gary Kasparov had a very copybook rivalry with Anatoly Karpov, where he humbled his opponent in 3 of their 4 outings.

Gary Kasparov parted ways with the FIDE to set up his own organization which he later termed as the biggest mistake of his life. Kasparov, even after losing his title to Kramnik in 2000, remained at the top through his sheer brilliance.

For 20 long years, Kasparov kept humbling opponents far more experienced than him. Kasparov now leads his life as a Russian political enthusiast, but nothing will stop fans from remembering him as the best player in the beautiful game of chess.